Jaxon Reed is a speculative fiction writer, a two time Kindle Scout winner, and the author of about 50 books depending on how you count them. He is best known for the Milky Way Universe, a collection of space opera boxsets available on Kindle Unlimited. His current web serials include ParaDiv Ops on Kindle Vella and Steamworld on Royal Road. He lives in Texas on a ranch with his wife and boys, numerous cats and one pound dog. 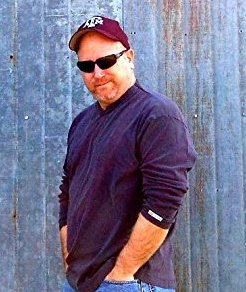 I started writing fiction as a kid. Of course, most of that early work was garbage. I took a break after college with real world concerns pressing in. I wrote lots of nonfiction in those years, for work mainly, along with the occasional short story. Then, along about 2013 I started working on a book I had been thinking about for years. This became Redwood: Servant of the State. Amazon had opened up KDP by that time, and it seemed natural to just self-publish it as an e-book. That came out in 2014, and I started working on two sequels, having in mind a trilogy. Along about 2016, Amazon introduced Kindle Scout, pitched as a competition for indie manuscripts. I wrote The Empathic Detective, about a futuristic policeman in Austin, Texas with psychic abilities, specifically for Kindle Scout. The editors liked it and sent an advance. I finished the Redwood Trilogy, wrote a sequel to The Empathic Detective which was also picked up as a Kindle Scout title, and I just kept going from there.

For space operas, the word count usually hovers around 50,000 words a book, with one book a month released. That’s when all cylinders are firing and nothing else is on the front burner. While this may seem short, they usually end up in 10 book boxsets of half a million words or so. Those boxsets take anywhere from 10 to 14 months to complete, depending on how fast the books are finished.

When focused on cranking out the shorter novels, I try to do four chapters a day over ten days. It hardly ever happens over ten days straight, but usually I can work those ten days into a month. I write better in the morning, while I’m fresh. But life is not always considerate in that regard, and I end up writing at all hours whenever I can fit it in.

I keep my eyes open for interesting tidbits and factoids, as well as ongoing research, at all times. If I find something interesting, I’ll make a note and may incorporate it into a story somehow. Sometimes when discussing an invention or process that does not (yet) exist, I can point back to experiments in our time that paved the way. In this regard, I think paying attention to the news is very helpful. I read the Wall Street Journal daily and pay attention to the Saturday Book Review section, keeping an eye on the latest nonfiction coming out.

Editing, for me, is not as enjoyable as writing the first draft.

I would have to say those books in the Milky Way Universe. Pirates of the Milky Way started as a web serial on Royal Road and other sites. I learned a lot over the year it took to write the series, and received a surprising amount of support from readers who enjoyed the ride along with me. When I took it off the free sites and placed it in KU, it found a new set of fans. I’ve since completed a sequel series, Agents of the Planetary Republic, and I’m about halfway through a third one, Star League Assassins.

I had the most trouble completing my urban fantasy series, The Fae Killers Compendium. Looking back, I think the plot was too convoluted. It just bogged me down thinking it through. I had originally planned for it to be a five-book series, and necked it down to four just to finish it. It has never sold well, and I have not dipped my toe back into urban fantasy waters ever since.

KIndle Unlimited is God’s gift to authors. The subscription model is well-liked by readers, and Amazon pays out to authors for every page read. Exclusivity simplifies advertising and other expenses, and the whole system is geared to let writers write and worry less about dealing with multiple platforms.

I am a hybrid author in that Kindle Digital Press has the rights for my two Scout books. Some may dispute that Apub titles are “traditional,” but Amazon does have several imprints, even if they’re not considered part of the American Big Five/Four. I would certainly entertain offers if contacted, but from my understanding larger publishers are not usually interested in indie titles, in most cases. I’m very happy with the royalty share Amazon offers indies, and the KU payouts. That’s hard for a trad publisher to beat. But, never say never.

I don’t know. I’m not too worried about them, because most of them are unfinished for a reason. And of course, we’re talking stuff that goes back to grade school.

For me, series sell better.

I’ve always enjoyed the interactions between Kirk, Spock and Bones as portrayed by William Shatner, Leonard Nimoy and DeForest Kelley. Character interactions really make a story, whether it’s set in space or in a desert or anywhere else.

Books don’t become books until they’re finished. Ironically, an author can’t improve until finishing a book. I wish I had finished more books sooner, but I’m catching up as fast as I can.

We live in a multi-ethnic world so my futuristic fiction is typically multi-ethnic as well. Fiction can take on societal challenges, but my books are more about telling a story than trying to change society for the better. There are novels out there that address societal issues through the lens of gender and race, and they are written by authors better suited to address those subtexts. I’m just trying to tell a story.

I feel very successful at this level, and I appreciate the income. Of course, more is better. But everyone has a tendency in this business (and others) to compare themselves with others. Rather than get caught up in that, I’m working on finishing my next book. I think if you obsess over how much the other person is doing compared to you, you’ll never be happy.

I remain active in writers’ groups. Mostly as a lurker, but occasionally I’ll contribute a comment or two.

I’m active on the ranch, and I try to get in some extra walking every day. Two miles a day is my goal. Sometimes I don’t meet it, sometimes I exceed it. Walking also helps get the creative juices flowing.

Entrepreneurs and authors are similar. It takes a lot of work to get a business off the ground. It takes a lot of work to finish a book. Just as authors face negative reviews, entrepreneurs face criticism for their ideas. Fred Smith famously earned a C on his college paper at Yale outlining the idea for FedEx. Years ago, I read that successful entrepreneurs take negative remarks and turn them into fuel for growth. In other words, rather than letting the wind go out of their sails with negative criticism, they use it as energy to develop their business. In the same way, I think authors have to take what they can from negative reviews. I do try to read all mine, although some older books might get a review here or there that I don’t notice for a while. A few negative reviews might have some honest criticism, and that helps my growth as an author. If one is just vicious, I smile and say a prayer for the hateful soul who left it.

I have to give a nod to Dwight Swain’s Techniques of the Selling Writer. It’s worth its weight in gold for how to write a story. Jack Bickham and others in the Oklahoma Professional Writing Program deserve a shout out as well. I can happily point to them for books that will inspire writers, even as an Aggie (from Texas A&M).

I’m a big fan of Robert Heinlein. Books in which his Lazarus Long and Friday characters appeared are phenomenal.

I have a basic outline that serves as a tree and branches. While writing, I fill it out.

I greatly enjoyed writing about Granny in Pirates of the Milky Way.

Not really. In a way, as an author I think we’re always keeping an eye out for characteristics, phrases and attributes in the people around us. That gets used or reshaped in dialogue and other story elements. But there’s not really one character I can point to who is completely reminiscent of a real life person. At the same time, there are some with elements from real life persons, such as Granny mentioned above. She has a personality similar to my maternal grandmother’s.

No contracts surely ranks up there as one of the best. You are not beholden to a publisher if you want to re-issue a book, or do something else with it. Marketing probably ranks as one of the worst, but then trad authors have to deal with marketing too, or a lack thereof.

Yes, although I have other sources of income as well.

Finish your book. Just finishing your first and going through the process of getting it out there will teach far more than any course ever will.