My name is Kathleen McClure, and I write Sci-Fi and Fantasy, with an accent on the fantasy, by way of a theatre degree (though to be fair, I started writing Star Wars and Star Trek knockoffs at the age of fourteen).

I now have two series in the world, The Fortune Chronicles and The Zodiac Files, which include solo and co-authored works, and I’m also building a solo urban fantasy world around and between the other stories.

The Fortune books feature low-tech adventures on a distant world, while the Zodiacs are spy-fi romps with echoes of The Man from U.N.C.L.E. or Agents of S.H.I.E.L.D. (That’s a lot of acronyms, there).

All of our first-in-series books are available for sale and in serial format on our website, where we are working to create an immersive experience for readers, including casting choices, recipes mentioned in The Fortune Chronicles, and other behind-the-scenes bits. 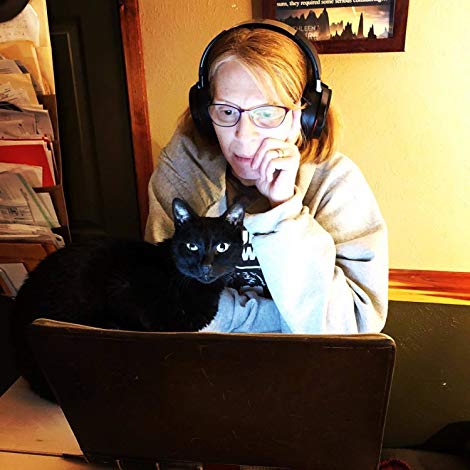 Whew, okay. So, as I stated in the bio, I started writing at fourteen, with the belief I would become an amazing, famous sci-fi author. Then I thought I’d be a forest ranger, and then I was looking at telecommunications, and ended up with a theatre degree, only returning to writing at the age of 41, when a friend convinced me to join NanoWrimo, and I remembered how it felt to create brave new worlds (and such people, in them!). It was still a good few years of continual pounding out fiction, and even joining a Star Trek RP (and let me tell you, a brain can learn a lot about action and pacing in the RP world) before the writing for fun became writing for publication. Since first publishing Soldier of Fortune in 2015, I’ve been writing almost constantly, but not quickly, so I’ve also been learning the best ways to both write and disseminate my work, in alignment with my strengths and values. Yes, it sounds woo woo, but it’s a lot more fun, and productive, to work with one’s own brain than to try and do what “everyone else is doing”.

At present, my routine is I have to write five words of new fiction a day. That is the only requirement. I usually write anywhere from 200 to 1500 per day, as the spirit moves. I used to do the word count thing, but ended up with an unholy amount of unusable words—this goes back to how different brains work differently—so I stopped counting and now end up with more, better words.

Zero. I do zero research before starting.

This will change by the day, but today, I’d say Fortune’s Fool, because of the Romeo & Juliet device that I never intended to include, but just kept popping up in the narrative. Go subconscious!

The Libra Gambit, which went on hiatus for over six months—pandemic, death in the family, two authors burned out—it was…rough.

Actually still exploring that. I’m experimenting with the hybrid of serial and ebook publication, and hoping to add podcasts of the serials, to reach a wider audience.

I have one unpublished, several unfinished and a few other old ideas floating around—but a lot of those may be repurposed into the urban fantasy series I’m building. I also have three Fortunes and one Zodiac in various stages of development, with a Tale of Fortune (with Kelley McKinnon) closing in on the end of draft one.

I prefer series, because I’m all about living with the characters, getting to see them grow, change, falter, struggle, and persist.

I swear this isn’t a cop-out, but I don’t wish I’d created anyone else’s character, because I know, having a unique brain, I would not have made that character the way I love them. But, I will happily take inspiration from characters I love, and morph them into something new (see Austin Kleon’s “Steal Your Art.”

See above. I have been very much inspired by Terry Pratchett’s Guard novels, but I would never have wished to write them.

The first measure of success as a writer for me is loving the stories I write. The second is building a strong base of happy readers who not only enjoy these particular stories, but engage in conversations about them—I’d love to see a Team Elvis on Discord, or a fanfic of The Known. The third measure is a core of readers who love what I do enough to support it, either financially or by sharing the love far and wide. And the bonus (an author can dream) measure is to see somone going to a con in Gideon Quinn or Mia cosplay, with a puppet Elvis on his/her shoulder.

Oddly, it never occurred to me I needed to take those steps until lock-down, because I always had things to do out in the world (two kids=lots of driving/meetings/volunteering). Then 2020 happened, and months into the pandemic I hit total burnout. I now have to schedule “Leave house—talk to a human” times, just because the built-in systems of being a person in the world are gone.

I have a modified HIIT workout, five days a week, walking a few times a week, and use the standing desk for certain tasks. Hoping to return to tai chi classes this year.

I used to, and then I stopped, because while the bad ones can be hurtful, the good ones made me feel too much pressure to deliver a similar experience the next time.

Fiction: Men at Arms by Terry Pratchett; Non-Fiction; Becca Symes Dear Author series (there are loads more, but those are the top two).

Nope. I don’t do favorites. Too many greats.

Hybrid. I’ve tried extreme versions of both and discovered I’m at my best if I tai chi my way through a story. If the flow needs a little framework, I build out a chapter or a plot thread, if it doesn’t, I just keep writing.

I did a physical representation of a friend’s sons in one, but I got permission, first.

Best is, I can write what I like, and I get to define my own version of independence. The worst is finding readers while being an introvert with extreme imposter syndrome.

Know your strengths, use them, and define your own version of success, because someone else’s version may not fit in your skin.